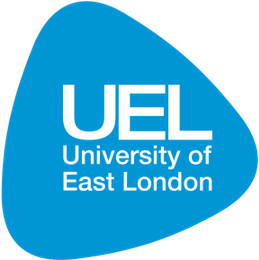 UEL became a university in 1992 with a heritage dating back to 1898 when it opened as the West Ham Technical Institute and became known as 'the People’s University’.

East London is one of the most exciting culturally rich places in the UK to attend university. A diverse and dynamic community, East London is at the heart of Europe’s largest regeneration project. High-tech and creative industries are increasingly heading to East London and Canary Wharf – the world-leading financial centre º is also on our doorstep.

UEL has two fantastic modern campuses with well-designed studios, laboratories, libraries and a £21m sports centre called the SportsDock. Transport links are excellent with central London an easy 30-minute train ride away and a free shuttle bus between campuses. The UEL Docklands campus has its own train station and is close to the O2 (Millennium Dome), London City Airport and the historic Royal Albert Dock.

Their Stratford Campus includes the £33m University Square Stratford, which opened in 2013 and is close to Stratford International station, the 2012 Olympic Park and Westfield shopping centre.

On the latest NSS survey UEL scored particularly highly in regards to 'learning resources' with a score of 85%. This shows our overall commitment to meeting the needs and diversity of UEL's learning and research community.